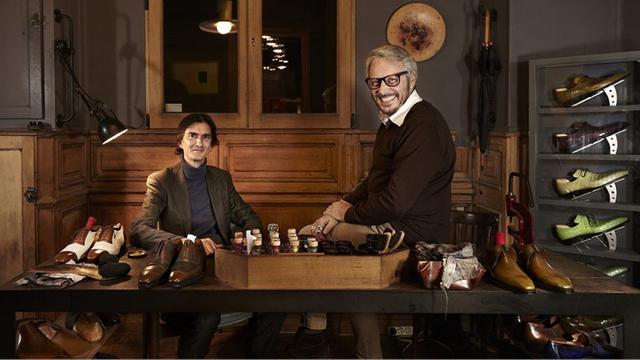 If your steps carry you in the wax pantheon that is the Grévin museum, on the great Parisian boulevards, take a look at the feet of the effigy of Pierre Hermé, statuized since early October.The famous French pastry chef carries magnificent shoes.Of the Corthay.Less famous than Berluti or Lobb, Corthay nevertheless have their fan club.Pierre Hermé swears by them: "I love them.Stone has crazy talent.I find things from him at home, or from me at home, as you want!I buy him a pair per year, and I keep them forever.»Jacques-Antoine Granjon, the boss of Vente-Privée.com, would have fifteen pairs of the same model, but of different colors.Both - like a multitude of stars, sportsmen, artists, bosses - once crossed the door of the store -store on rue Volney, a stone's throw from Place Vendôme and its prestigious jewelers.Impossible, by entering this real small case, not to be seized and then bewitched by the scents mixed with leather, wood, wax...Here is a whole world which, in the rules of the art, refines the patina of customers of customers around the world."Come, I'm going to show you our workshops," invites, courteous and charming, the master of places Pierre Corthay, all in sober elegance.Only a "skull" ring brought to the finger announces the singularity of the character."He is an extraordinary perfectionist and esthete, a lover of good expensive, fine wines and offbeat places," says one of his knowledge.Direction the basements, therefore, with the appearance and smell so characteristic of Parisian cellars.

There, in the lair of the only Bottier art master in France, the wooden forms of the feet of prestigious customers are suspended from the walls..Their name is listed in the felt: the tennisomenal Nadal and Tsonga, the actresses and actors Cate Blanchett, Matt Damon, Clint Eastwood, Jean Reno, Leonardo Di Caprio;Aditya Mittal, the son of the CEO of ArcelorMittal, Pierre Hermé, Jacques-Antoine Granjon...Pierre Corthay readily tells that the purchase of 150 pairs by the Sultan of Brunei launched the company and that the contract with the prestigious Long Island Golf Club finished the ready-to-chausse.But also that a school bus driver saved out to buy tailor -made corthay and leads his bus with it!Stars or simple lovers of the beautiful capable of breaking their piggy bank to offer a pair at 6000 euros, modesty is in order here.All and all are housed in the same brand when it comes to stretching your feet to the master of cess.Entry in matters is almost the Psy couch to verbalize his idea, his desires.Bottier's informed opinion can avoid faults of taste and look.At Corthay, we expose more than his feet.Impatient.It takes about six months to take the measurements, sculpt the wooden shapes, make the first draft, try, rectify, choose the skins (French calf, camel - a Corthay innovation), cut and assemble the shoes, adjust them,Choose the shade, apply it, wax or freeze...The price to pay to find shoe - perfect - at its foot.

From here only come out a few hundred pairs per year.Others will prefer to choose a more standard “ready-to-chausse” model-still count 1140 euros per first price-made in the Beaupréau artisanal factory, a small industrial town in Maine-et-Loire, inSome plea for Cholet.Beaupréau is for 90% of the turnover (around 10 million euros) of Corthay house which makes around 10,000 pairs per year, with the same care and the same skins as rue Volney.Quantities far from reaching those of the "big" in the sector, such as Berluti and John Lobb, the closest inmarkets, whose estimated volumes revolve rather around 60000 and 30000.But the race for figures is not the objective.

United in the passion of beautiful

This outsider of the exceptional shoe failed to disappear.Corthay is a sort of Obni -unidentified kick object -, a little "rock", arose only twenty -five years ago, in 1990, before entering and gaining respect for his peers."I have always compared myself to a chef, iconoclastic and sassy, who seeks to constantly innovate on materials, patinas, assembly in my lab-workshop", defines Pierre Corthay.The 2008 crisis and the defection of a large Japanese distributor, causing a 30% drop in turnover, put the business on their knees, then pushed to receivership.Today from business, it is now a curious tandem that officiates, while in style opposition.

At 53, the founder took a step back - surely a little on the contrary.He is today "Art Director" and remains the inspirer, the guide, assisted by his younger brother, nine years younger.It is the discreet Xavier de Royère, 47, one of the key shareholders, who assumes the function of CEO.Fire and water will say some.But go know who is really what.Both undoubtedly meet in the passion of the beautiful and in the desire to perpetuate a company which, whatever happens, will remain the affair of their lives.

Pierre Corthay, first.A beautiful story, a character.Comedian parents: Father Sylvain, a former of Peter Brook's troop in the 1970s, whom he often accompanies in tours;Mother Catherine Sola, who turned with Lautner, Dhéry, Chabrol...A schooling marked by alternative pedagogy Steiner.And the diligent attendance of the sculpture workshop of his great-aunt, Valentine Schlegel."I was going to her house in the evening, she also worked the leather and it was there, from 8 years old, that I had the revelation," recalls Pierre Corthay.At 17, he left the family fold for seven years of learning among the companions of duty with, as reception work, a pair of Mexican female boots.Follow two years at John Lobb, then the post of workshop manager of Berluti and international marketing and development courses at the CCI in Paris."I always wanted to create my business," he recalls.What he does in 1990.Also story to take up the torch of an almost disappeared tradition - Paris, between the two wars, was the capital of the Bottiers, with its 450 craftsmen.

Corthay will gradually impose himself.The ready-to-chausse starts in 2003 with a few machines in a workshop in Neuilly-Plaisance.Today "liberated" from business management, Pierre Corthay admits devoting a little more time to his hobbies.A way of staying open to creativity.Lover of blues, jazz and rock, he gets up early every morning to play the guitar and sometimes performs with his friend actor François Levantal.Painter in his spare time, he leans for the abstraction of Jackson Pollock or Joan Mitchell and for the artists of the support/surface group, Claude Viallat in particular, for whom the material and the gesture count more than the subject.

The master Bottier and the entrepreneur

In this yardstick, Xavier de Royère may seem of another world.Where Pierre Corthay dissects legs crossed on the sofa, relaxed and smiling, small beard and mustache with a skillfully studied clutter, this long 47 -year -old quadra - obviously the job keeps well -, dressed in dark is tense towards the interlocutor, thelively and ardent eye, concentrated and all convictions outside.Another way of being inhabited by passion.This Périgourdin fan of rugby and devourer of paper newspapers - only confidences he allows -, son of the former CEO of Air Liquide Edouard de Royère, aligns the stages of the future boss on his CV: ESCP, three years old atArthur Andersen, then direction luxury.The LVMH “Retail” sector, where he meets Yves Carcelle, a long time CEO of Louis Vuitton, who died last year.A mentor he worships.Ten years at Le Malletier, first: sales assistant avenue Montaigne, director of the "flagship" on avenue Marceau, launch of the Champs-Elysées store in 1998...Departure for London - five years - before entering the Loewe subsidiary: Hong Kong, first, then the brand's headquarters in Madrid...A faultless course.

But where we could expect to see him climb the steps to the summits, he will choose to stand on his own feet."I wanted to continue to undertake.I learned that Pierre, that I did not know, was looking for a partner.A friend went for a tour of Volney and told me about an incredible product.I glimpsed its potential in a strong growth segment and I plunged.Of course, there is a lot to do to erase the traces of the bad pass, between 2008 and 2010.But this is precisely his talent.He resumed the company in March 2010, invests, completes the Tour de Table with some shareholders.Faced with a Berluti or a lobb, both subsidiaries of large groups (LVMH, Hermès) there is room for an independent house, very "family business", 100% made in France and original."I fight to produce in France but it's not easy...", He smiles.And between the artist who sees his creation keep his DNA and the entrepreneur who sees the development potential, the agreement can be done.

The recovery is radical.The high-end positioning of ready-to-chausses is accentuated.The offer is reissued, refocused on only 20 models whose emblematic Arca Derbys, acclaimed by customers.The prices - too low for the quality offered, explains the CEO - are revised upwards and Volney is fully rehabilitated.In terms of marketing, a pub campaign in 2011, with the Rock Star Bryan Adams marks the spirits in the world: Corthay is back!And major decision, but surely painful for Pierre Corthay, the small factory of Neuilly is ultimately relocated to Beaupréau.Moment (re) founder, however, for Xavier de Royère: “Otherwise, we were dead!»»

Another key decision, international expansion with corners in the world's largest stores and the revival of owner shops on the Volney model.Paris, London, Hong Kong, Singapore, Dubai, Tokyo, Beijing...The news, today, is twofold: diversification, with a small leather goods line;and the opening of a new store in South Africa, in Johannesburg, November 25.A first, long -awaited and...Very observed in the environment.Corthay's "business plan"?"Make sure that when you receive a bonus, you get up and go into one of our shops to please you," says Xavier de Royère.Simple.

Interview, according to Pierre Corthay

01.Avoid wearing the same pair two days in a row - the leather must be able to dry and breathe - and put them on with a shot.Imperative: put an impact between two uses.02.Wip the dust every day with a soft cotton cloth.It prevents leather from breathing, which weakens it.03.Nourish the skin once a fortnight by gently massaging it with a hazelnut of cream.After half an hour, spread a little shoe polish.At Corthay, we only use Sapphire Gold Medal products.Make shine with an old nylon bottom rolled in ball.Traveler special: replace the hire with newspaper and...Ban the rotating brushes of hotels!