Peta launches a shop of clothing made of human skin 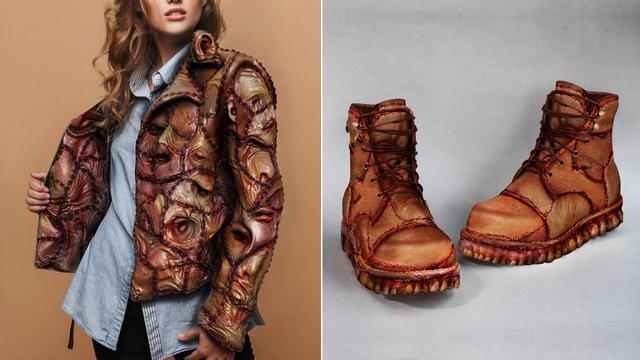 Peta launches a shop of clothing made of human skin

Fashion is sometimes surprising, but what this new e-shop offers is simply shocking.By linger on dresses, jackets, and other pairs of boots, we notice teeth and other details suggesting human skins.Rest assured, this is actually the new campaign of Peta United States, which has set out to parody a large fashion group to make it aware of animal abuse.

A campaign to challenge Urban Outfitters

The People for the Ethical Treatment of Animals association, better known by the acronym Peta, has multiplied campaigns for several decades to alert consumers and brands on the use of ingredients and other animal products in certain sectors,whose fashion and beauty.A struggle that has gradually led certain brands to stop, for example, the use of fur in their collections.At the end of the year, the association does not take tweezers to challenge the Urban Outfitters Inc mode group., broadcasting a shock campaign which should disrupt more than one.

Blood, teeth, scars as seams ... The new collection of the U-Shop U-Shop Outraged, online store of a new kind, should not leave anyone indifferent.Fortunately, there is no question of buying these clothes and accessories in human skin, but just to raise awareness - and in particular the fashion group in question - to animal abuse caused by the design of certain products andto speciesism, as Peta points out in a press release.

"Animals are not textiles and their skin does not belong to us.The Urban Outrage of Peta campaign asks consumers to become aware of the individual to whom each piece of animal skin belongs and to abandon the products containing in favor of ethical alternatives, ”specifies Tracy Reiman, Vice-President of Peta States-United.

Made like a real e-shop-we could really be mistaken-the Urban Outraged platform, which has its own Instagram account with the promotions of the moment, has its share of slogans like a fashion brand."A style that calls for a look at it twice" or "a fashion that dares to ask the question" but that do you? ’" Are among the sentences that you can visualize for the duration of the campaign.

Peta also gave each garment the name of the person who was "killed" for his manufacture.So you have the opportunity to shop "The Juliet Skirt", "The Meg Boot", or "The Sofie Dress".But it is however - and fortunately - it is impossible to buy these false clothes.If you try to put them in your basket, after selecting the size, you will be redirected to a new page questioning you on your ratio to leather, wool, or cashmere.